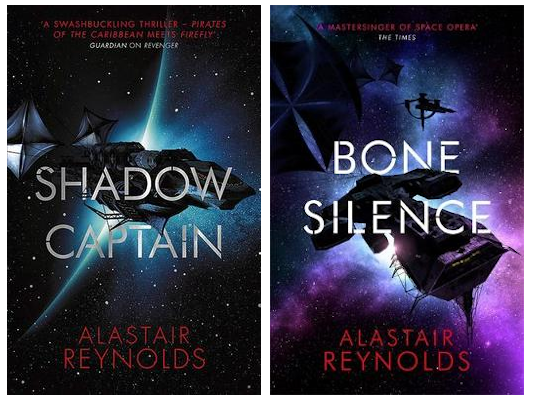 Shadow Captain and Bone Silence are the follow-up novels to Alastair Reynolds’ 2016 space pirate sci-fi fantasy Revenger, and it’s hard to write about the plot without giving away what happens in the first novel and spoilers as to its ending.

Suffice it to say that the universe is still the Spanish Main in space, and that the sisters are still adventuring on the cosmic high seas.

The stakes were high in Revenger, but they’re even higher now.

There’s the search for booty, new extra-villainous villains, secretive aliens with secrets, and the fate of the human race is now at stake. We visit run-down ports of call on the edges of the trade routes, and the pirate’s paradise which is Tortuga. Sorry Trevenza’s Reach.

Bone silence is the last book in the series, and although we have a good idea what’s going to happen after it ends - and it is a very satisfying ending, Reynolds doesn’t resolve all of the questions and mysteries raised in the trilogy. To my mind, that’s a good thing - there’s no way a couple of space teenagers should be able to unravel all the mysteries of the universe before they’re twenty.

The High seas vibe is still there, the piratical language is present as expected, and the pacing is perfect for an adventure.

As a series suitable for adults and older kids, I’m giving the three books of revenger a flawless 10/10