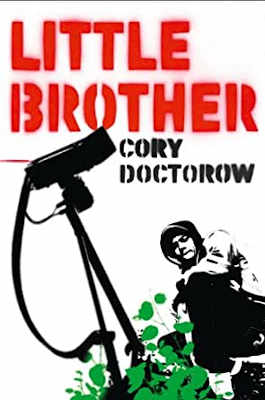 Little Brother by Cory Doctorow is practical cyberpunk in a fictional guise.

I’ve avoided this novel for a while now as it’s a ‘young adult’ book. I didn’t like YA fiction when I was actually a young adult, or a teenager, or even, a child. Swerving it was a mistake.

Set in the aftermath of a terrorist atrocity on US soil, Little brother is focussed on the overreach and lack of accountability of government agencies, and the willingness of people to put up with a tonne of bullshit in the name of security.

You’ll find a lot of real world hints and tips to disrupt shit and avoid surveillance - and barely veiled references to real world tech. A lot of the hardware can be purchased on Amazon or Alibaba; ParanoidLinux is obviously Tails, and while I was aware that the original XBox could be made to function as a PC, Little Brother prompted me to check the current state of play with regards to more recent consoles. To my surprise, the Playstation 4 will run Linux. A used PS4 will set me back maybe 70 quid ($100). Guess who’s buying a PS4 next weekend?

It’s little things like that which make Little Brother a gem. Deus ex machinae or devices which send you to the nearest search engine to see what the real world equivalent is - and holy crap! It’s actually possible.

I would have no problem recommending Little Brother to my 14 year old daughter as a somewhat insidious and subversive primer.

Cory Doctorow releases all of his books through Tor and retains the license to distribute his own electronic copies for free. You can legally download Little Brother for free here: https://craphound.com/littlebrother/download/

Alternatively, you can buy it on Amazon