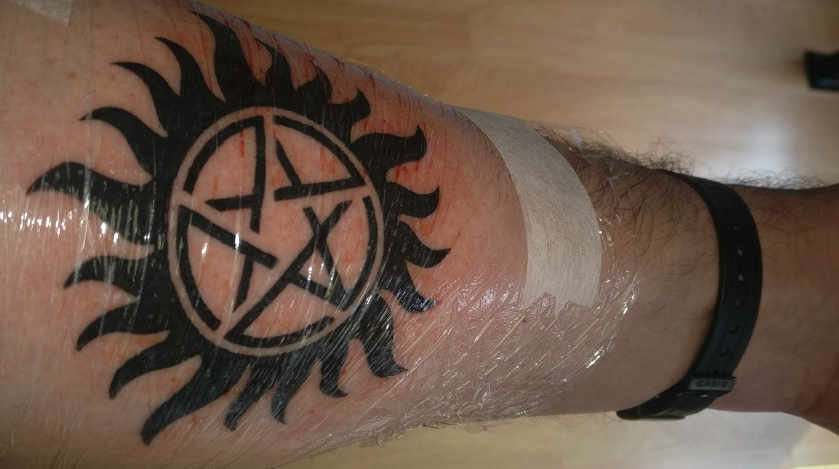 Do you know why we say ‘bless you’ when someone sneezes?

I grew up hearing that it’s to stop the invisible demon - which is forced out of our noses by the force of the blast - from scrambling back inside and possessing us (other explanations are available).

Weird, but its such a powerful belief that people, in Britain at least, have been saying it for hundreds of years.

Following a pleasant 90 minutes in a tattoo parlour last Wednesday, bystanders are now given a free pass when evil spirits evacuate my nostrils at 70 MPH.

I’m now rocking an anti-demon tattoo, and it will apparently keep me safe from assault by demons, ghouls, and other evil spirits.

There is no guarantee that having been barred access to my hallowed nostrils, the demons won’t try to go up yours instead.

OK. You got me. The design itself is from the TV show, Supernatural, and is featured prominently on Dean Winchester’s manly and oft-displayed pectorals.

But the symbol itself - or at least the components of it - go back further considerably further.

The five pointed star can signify the five wounds of Christ, if Christianity is your bag. It also represents the path taken by the planet, Venus, relative to Earth over a six year period - the kind of retrograde motion which gave astronomers some of the most compelling and suggestive evidence that all planets (including Earth) orbit the the Sun.

The star itself is in a circle, and composes part of its own boundary. Does it represent the Earth? The circle of life? The wonder of geometry? My own explanation varies depending on my mood.

Finally there’s the Sun over which the rest of the design is laid. It’s the sun, and on a glorious April morning such as it is today, I’m feeling a great affinity to it.

Plus, I’m protected from demons.