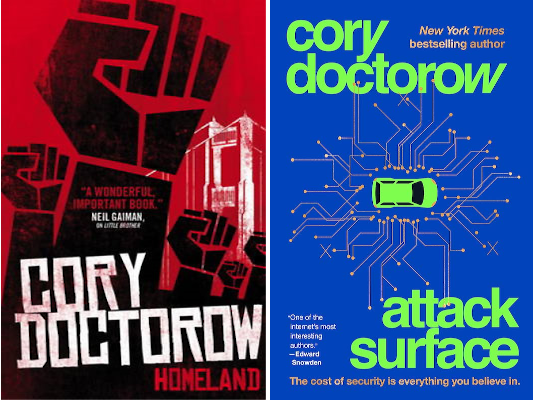 I like Cory Doctorow’s novels. I’m a latecomer to the party, only having found out about this author 18 months ago (ish).

Since then I’ve been on a Cory Doctorow diet. I’ve not been reading his stuff exclusively, but every now and then, I’ll pop along to craphound.com and pull down another epub.

Homeland is the immediate successor to Little Brother and follows Marcus Yallow and pals as they deal with the fallout from the events in Little Brother.

Little Brother mostly concerned itself with the evils that governments and government departments do in the name of your security. Homeland and Attack surface are more concerned with the evils that corporations do in the name of money, and the potential for zero oversight, unaccountable badness when they integrate with the public sector. No surprises there - unbridled capitalism is evil. We all knew that already.

Homeland’s chief baddie is once again, Carrie Johnson (severe haircut lady) who has managed to ensconce herself in a high ranking position in one such corporation as it embeds itself as a government subcontractor for everything from surveillance and counterterrorism to student loans.

Consider how evil such a corporation could be and then double it - that’s nearly how evil Carrie Johnson’s Zyz is.

There are guest appearances from Will Wheaton and the founders of the EFF, which felt a little forced, and I was half expecting Richard Stallman to stroll onto the pages to start a deep expository conversation with the protagonists

Attack Surface is, without a doubt, the best book in the whole series and the only one which doesn’t feel in some way that it was written for ‘Young Adults.’

The Protagonist is Masha - a young female hacker who finds herself working for the DOH under Carrie Johnson after the Bay bombings of the first novel.

She’s a sympathetic character working for private sector surveillance megacorps and she has a filthy secret - she lends material and technical support to the very dissidents and demonstrators she’s supposed to be surveilling.

Some of the old gang appear as secondary characters. Carrie’s there (getting wasted on red wine). Marcus and Ange, of course.

Attack surface is paranoid and it’s dark. And you should read it.