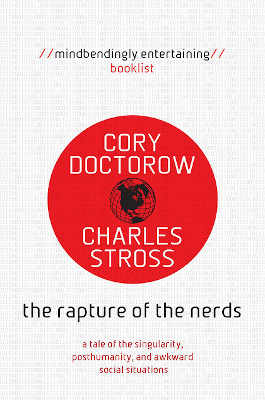 Cory Doctorow and Charles Stross are two of my favourite authors. They’re among my go-tos when I’m looking for something new.also on that list are Peter F Hamilton, Neal Stephenson, Connie Willis and a few others.

It’s rare to get team-ups between favourites - at least in the real world it is. Comic book heroes do it all the time. Batman v Superman, the whole Avengers thing.

But as rare as it is, new worlds and series established by two great authors working together can be exceptional. You only have to look as far as the stephen Baxter / Terry Pratchett Long Earth series to know the truth of this.

I saw the cover for Rapture of The Nerds of Doctorow’s craphound site, spotted that Charles Stross was co-author, and realised that I would die unfulfilled if I didn’t read it right away.

What followed was.. weird.

Not weird in a bad way - weird in a whimsical, post-scarcity, post-singularity near future kind of way.

If you followed the adventures of Hackworth in Neal Stephenson’s ‘The Diamond Age’ you’ll be familiar with the style.

It’s slapstick, it’s opera, it’s a comedy of errors with a confused protagonist, and it’s glorious.